It’s a painting I’ve called A Different Perspective. It was commissioned to celebrate 50 years since the inauguration of the Valero refinery in south Pembrokeshire. The unveiling ceremony on 8th November celebrates Valero’s role in the community not only as a major employer, but as a contributor to Pembrokeshire and Welsh life. It sponsors many events and charities and is a major benefactor to the Royal Welsh College of Music & Drama. It is a major sponsor for the county show, etc, etc., etc…. This year, it’s main charity is the Paul Sartori Foundation, but there are many more charities that it helps. The CEO of Valero and his family are coming over from Texas to celebrate, and the Duke & Duchess of Cambridge are going to be given a guided tour and some entertainment by students from my old college, the Royal Welsh College of Music & Drama.

It’s a whopping great big painting which seemed to cause a lot of interesting and colourful language to waft from Alan’s workshop. I must say, he’s done a super job of the framing, which really does suit the painting, but I have had to promise not to present him with another giant painting for about a year at least…..

I had a very interesting morning in the spring, being driven in a private minibus all through the refinery. I had expected noise and smells and smoke. No such thing – it was very quiet and incredibly clean. There was the occasional escape of steam from various pipes, but it was pure water vapour. There was a huge variety of tanks and pipes and interesting buildings stretched over a large area, and the estate also housed a Victorian fort  which was still in use as offices.

There was evidence of protected wildlife on the site, which was terribly exciting. As we travelled around, I suddenely saw the view  which summed up the place for me. Just off one of the tracks, over a hedge covered in wild flowers was a stunning view of the estuary, with Milford Haven as a hazy blur in the distance. To my right were great big storage tanks, hundreds of pipes and a large chimney. Upon clambering to the top of the hedge, trying not to trample all of the wild flowers, I looked down on an idyllic pastoral scene – an ancient farmhouse now owned by Valero, still with some of the original turreted walls standing, which has been built on to over the years and which is  still being run as a farm. There was a small herd of young cattle grazing peacefully.

Although I was surrounded by sophisticated 21st century industrial plant, it was working in harmony with centuries old agricultural husbandry.

Here was my painting.

Here are a few photos of the work in progress.

Priming the canvas with burnt sienna.

Then starting to block it out:

It was an overcast day when I was visiting, which made the distant shore quite dark and hazy:

The painting would have had to be even bigger if I was going to realistically present the elements in their right places, so the change of perspective came into play in a physical sense too:

This was the first positioning of the farm…….too big and too dominant, and no room for the plant at all. So paint it out and start again:

Nearly there now. After moving the farm 3 more times, that is. 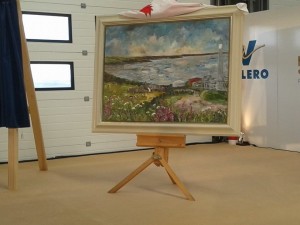 Well, everybody hada lovely time at Valero this morning, including that very nice couple I  met, who looked strangely familiar…..more photos to follow. 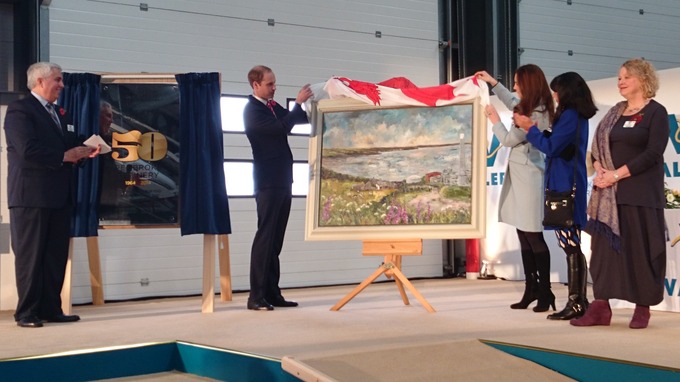 Not only did the Duke and Duchess have a guided tour of the refinery, but they met representatives of the local charities that Valero supports and we were entertained by talented students from the Royal Welsh College of Music and Drama. I met an old colleague from my singing days and was delighted to meet some of the new team in charge of th RWCMD. Things have changed so much since my day at the college….and for the good! I look forwards to visiting them when I am next in Cardiff.

There is now no minimum order for cards as I have adjusted the inclusive postage costs. If you buy multiple cards, I will refund any excess postage you have paid. All items that are for sale have an 'add to cart' button on the little window that comes up when you click on the image. Postage: Most prints have a blanket charge of £10.00 each (one or two larger ones have p&p as as stated), which is added on in the shopping cart. Other items include p&p. PLEASE EMAIL ME FOR OVERSEAS POSTAGE COSTS BEFORE BUYING! This site uses a Paypal shopping cart. For details, click the button below: If you have not finished your shopping, please use the back arrow at the top of your browser to return to the site if there is no 'continue shopping' message on the Paypal shopping cart page. I'D BE GRATEFUL IF YOU WOULD SEND ME YOUR PHONE NUMBER WHEN YOU MAKE AN ORDER AS SOMETIMES YOUR PAYPAL EMAIL SENDS ANY EMAILS FROM ME INTO YOUR SPAM BIN! If you have any problems, please contact me